Many of our clients from motor vehicle collisions, trucking crashes and natural gas explosions sustain an inner ear injury along with other injuries.  The inner ear is located behind the ear drum within the skull, but can be injured by trauma.

This article is about Canal Dehiscence.  Future articles will address Perilymph Fistula, Endolymph Hydrops and BPPV.

The inner ear is comprised of two main sections; the vestibular system and the cochlear system.

For those people who sustain inner ear injuries as a result of trauma, most people have vestibular (balance) problems, but you can also have sensorineural hearing loss from an injury to the cochlear part of the inner ear.

People who sustain traumatic inner ear injuries will experience one or more of the following symptoms:

The anatomy of the inner ear is dominated by large fluid-filled spaces. The inner ear consists of a complex series of tubes, running through the temporal bone of the skull. The bony tubes within the inner ear (sometimes called the bony labyrinth) are filled with a fluid called perilymph. Within this bony labyrinth is a second series of tubes made out of delicate cellular structures (called the membranous labyrinth). The fluid inside these membranous structures is called endolymph, The different spaces of both the perilymphatic and endolymphatic compartments are interconnected by a series of ducts.

An important feature of the endolymphatic space is that it is completely enclosed by tissues and there are normally no ducts or open connections between perilymph and endolymph.  These fluids are retained by the round and oval windows at the front wall of the inner ear.  The inner ear structures are normally completely closed off from the skull or "cranial vault" that holds the brain.  A fluid called Cerebral Spinal Fluid or "CSF" is produced in the brain and surrounds the brain, circulates down into the spinal canal and then is circulated back up to the brain from the sacrum.

The existence of the many ducts connecting different parts of the inner ear has led to the idea that the cochlear fluids are flowing through the ear. However, unlike other body fluids, such as saliva or lachrymal fluid (tears), the fluids of the inner ear are not secreted and resorbed in volume. This is a widespread misconception, based on old studies that used poor experimental techniques. Studies performed over the past decade have shown that neither endolymph nor perilymph “flow” along their respective compartments in the normal cochlea. Maintenance of the chemical composition of both fluids is dominated by ion transport processes which are localized in each region.

In the vestibular system, as the body or head moves, fluid spins within the semicircular canals.  The semicircular canals are organized in each of the three planes of motion - 1. Forward / Backward; 2. Side to side (lateral flexion); and 3. Rotation.  Sensory hairs within each of the three semicircular canals are activated, telling the head and body where it is in space, or how it is moving in space.  If you are moving your head forward, back, side to side, or rotating, the body can tell that through a sense called "proprioception" that tells your brain how you are moving.  Proprioception is a complex neurological network calling upon information from the inner ear, brain, eyes, and muscles. Unfortunately, with inner ear injuries these semicircular canals, the perilymph or hair cells can all be damaged leading to abnormal stimulus going from your inner ear to your brain resulting in the symptoms noted above.

A traumatic canal dehiscence can also be caused by the upper or superior semicircular canal being fractured, thereby leaking out the perilymph and endolymph, negatively impacting the function of the vestibular system in providing proprioception information to the brain. 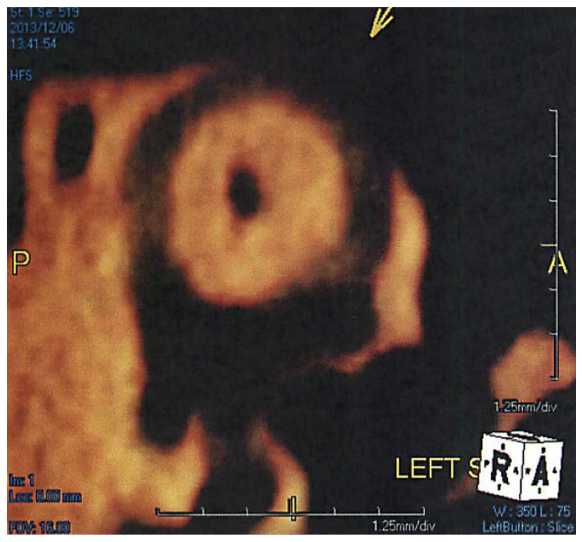 A dehiscence can now be imaged at high resolution CT facilities with experience in this imaging.  The image to the right demonstrates a case of dehiscence where a CT was able to demonstrate our client’s dehiscence – with the arrow pointing to the fracture in the cranium above the semicircular canal.  Clinically, the result of this finding was that the client had to undergo neurosurgery to fix the cranial fracture and minimize damage to her brain.

Since we didn’t feel that the above imaging and chart notes properly illustrated the damage to our client, we used the DICOM digital files from the imaging CD (obtained from the advanced imaging facility) and had it 3D reconstructed using medical imaging software.  Given Dr. DeShaw’s extensive education in radiology, and experience taking and reading thousands of medical images during his career as a doctor as well as advanced brain imaging in cases during his career as a lawyer, he is able to focus in on the areas of the imaging to find the images that best reflect the damage to our clients.

In this case, we were able to find the following images in the original imaging files post-surgery. As you can see in the image below, the imaging showed that our client’s craniotomy had not fully healed, leaving gaps in the skull post surgery.  You can see gaps in the area of the skull removed during the repair surgery, as well as the metal brackets used to secure the craniotomy.  This is not an illustration - it is a 3D demonstration of the client's skull taken directly from their CT imaging data and shown in medical radiology software.